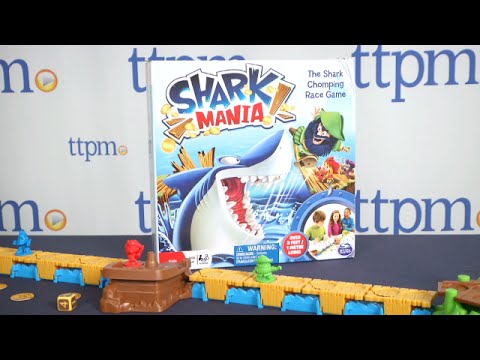 In Shark Mania, players must move their pirate movers across the shipwreck and to the island, collecting gold coins along the way and staying one step ahead of the shark. For full review and shopping info ►

Before you play, you’ll need to assemble the track, put the pirate movers on the shipwreck front, and randomly place the coins along both sides of the track skull-side up. When you’re ready to play, push the pirate chest on the island to start the shark swimming through the shipwreck track toward the island. Players take turns rolling the die and doing one of two things: moving forward that number of spaces or collecting that number of coins. You can’t do both and you must be quick to make up your mind or you might get attacked by the shark, and then you’d be out of the game. If you successfully reach the island, you are safe from the shark but you cannot collect any more coins on the island, so make sure you have enough before you get there. Once all the players who have not been attacked by the shark reach the island, everyone turns over the coins and adds up the numbers shown on the back of each coin. The player with the highest number wins.